Just when it seemed that the game had been won by the snake lovers, the enemy has re-emerged in the guise of money-grabbing criminals masquerading as snake-lovers.

Until recently, herpetologists (reptile experts) caught snakes by hand, or if using ďtoolsĒ these were restricted to hooks, or more commonly for wild snakes ďpinning sticksĒ the objective being to immobilize the snake long enough to ďtailĒ it (grab it near the end of the tail, not at the end of the tail), before dropping it into a bag or box.

While not necessarily a pleasant experience for the wild snake (as the grabbing is in the genital region), the snake would emerge from the experience physically unharmed.

Keepers of snakes used tongs to offer food to snakes, the basis being that if the snake missed the rodent being offered, a metal implement would be bitten, rather than a hand. 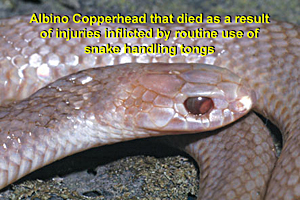 This was a particularly important consideration when venomous snakes were concerned.

In recent years a group of individuals too afraid to grab snakes by hand started using these same metal tongs as ďgrab-sticksĒ (shown above) for snakes.

The result: snakes getting their ribs smashed at time of capture.† This was due to the metal grip of the tongs on the struggling snake.† Unfortunately due to the nature of tongs and the way snakes struggle, the result of broken ribs and/or internal injuries was more often than not inevitable.

If the snakes didnít die from internal injuries, then a slow agonizing death from infection, septicemia or similar was the likely result.

Sure there were some occasions that a particularly placid snake may be able to escape serious injury from tong handling, but by and large the result was a slow agonizing death for these snakes.

More recently ďTV personalitiesĒ, Mark OíShea, and other misfits have sought to promote tongs apparently as part of their money making schemes.† No doubt the likely end-product is even more dead and mutilated snakes.† But at least OíShea and his mates may make some money in the process.

Reptile experts around the world condemn this cavalier attitude to snake welfare and believe that if a so-called snake handler is afraid to use their hands to handle a snake, then they should change occupation.

Tongs are for sausages on the Barbeque, not for snakes!

In most parts of Australia and the United States the use of metal tongs to handle venomous (or other) snakes is illegal under cruelty to animals laws.

For example in Victoria, Australia, the ďPrevention of Cruelty to Animals Act 1986Ē Sections 9 (1) a and 9 (1) c outlaws the use of metal tongs to handle snakes defining the penalty as ď60 penalty units or imprisonment for 6 months.Ē

For various reasons, the authorities have failed to act on the renegade bunch of ďtong handlersĒ who continue to inflict pain and suffering on snakes and worse still teach others to do the same.

More recently a number of ďtongĒ handlers have even attempted to deflect attention from their criminal acts of cruelty by making false claims to authorities in relation to veterinary supervised venomoid operations (venom gland removal) on captive snakes. Why? Because the venomoid owners have actively campaigned against the illegal use of tongs that inflict a painful death on the snakes. Furthermore, the first person to successfully venomoid snakes in Australia, Raymond Hoser, successfully sued some of Australia's best known tong using mutilators for misuse of his "Snakebusters" trademark and in December 2005 got a $39,500 pay out from them and their associates.

For the record, the venomoid operation has been shown to measurably reduce ongoing handling stress in captive snakes, by removing all needs for metal handling implements otherwise required for deadly taxa. Numerous top veterinary surgeons, reptile experts and others have confirmed this obvious fact.

Notwithstanding the obvious, the ďTong handlersĒ have knowingly made countless false, ridiculous and emotive claims against venomoiding, including that operations are done in garages, with non-sterile implements, using fly spray as a sedative, superglue to keep mouth's shut, mass mortality of said snakes and the like, all in a futile bid to divert attention from their own criminal acts.

The evidence for both sides resides in the reptiles themselves.† The allegedly suffering venomoids never die on the operating table and live long stress-free lives, freed from the shackles of hooks, pinning sticks and the like. Due to the lack of handling stress (they never need be forcibly restrained again) the venomoids are among the best breeding venomous snakes in captivity.

Meanwhile snakes mutilated with Tongs end up either dead in garbage bins, or worse still are released to die a slow and agonizing death.

There is no shortage of videos and websites detailing this tong-induced torture to snakes on the internet.

Surely if the government authorities are to allow so-called ďsnake handlersĒ to use tongs to impale and mutilate snakes, they may as well abolish legal ďprotectionĒ of reptiles and simply go back to the days of whacking snakes over the head with a shovel.† Even that is a more humane way to end the life of a snake.

As a "Stop Press", we've now been advised that certain "Tong mutilators" have been actively "shopping" animal ethics committees in order to find one or more stupid enough to "approve" of their actions, so as to give an air of legitimacy to this cruel and illegal practice.

To voice your displeasure to the increasing carnage of snakes to the tong brigade please write to your elected representatives and relevant authorities.

E-mail your protest by clicking here: