Originally Published in Crocodilian - Journal of the Victorian Association of Amateur Herpetologists 4(2):11-14. (August 2003)

ABSTRACT
Tropidechis has long been regarded by most herpetologists as a monotypic genus. A lengthy study of both live and dead specimens from the two known and geographically disjunct populations has shown that there are in fact two separate taxa involved. The species Tropidechis carinatus (Krefft, 1863) is herein restricted to north-east New South Wales and south-east Queensland. A new species name, Tropidechis sadlieri sp. nov. has been assigned to north-east Queensland specimens formerly regarded as Tropidechis carinatus.
INTRODUCTION
The Rough-scaled Snakes (Genus Tropidechis) are endemic to Australia. They are thick-set and robust medium sized snakes. The adults usually measure just under a metre in total length.
As their name suggests, these snakes have strongly keeled scales, which separates them from most other Australian elapids (see later).
They have a yellowish-brown or greyish-brown ground colour dorsally, which may or may not be traversed by a number of irregular darker bands, which extend from the nape for various distances along the body, fading posteriorly (Wilson and Knowles 1988). Ventrally they are lighter (creamish or yellow usually) with or without darker blotches and darkening towards the posterior end of the tail.
These snakes are commonly confused with the non-venomous Keelback (Tropinodophis mairii), but can readily be separated from the latter species by their higher mid-body scale row count (23 versus 15 or 17) and lack of a loreal scale (present in Tropinodophis mairii).
Tropidechis are usually found in wet forested habitats, usually near water. By day they are usually found sheltering in dense vegetation or under cover, although specimens are also sometimes found active. By night, they are regularly seen crossing roads in suitable areas, when the weather is warm to hot.
They are generally pugnacious when cornered in the wild state, although they usually tend to settle down somewhat in captivity. These snakes are dangerously venomous and deaths have been recorded.
They produce from 5-18 live young, with an average of 10 (Shine 1991), measuring an average of 16 cm (snout-vent) (Shine 1991) in late summer and autumn (Wilson and Knowles 1988).
Rough-scaled Snakes have been successfully bred in captivity (see Fitzgerald 1989).
It has been known for many years that there are two main populations of Tropidechis which appear to be widely separated by a straight-line distance of just over 700 km (Reilly 1963, Ingram and Raven 1991). Also refer to the map published on page 172 of Hoser (1989) for the known distribution of Tropidechis in New South Wales and Queensland, including a clear delineation of the area between the two main known populations, from where no specimens are known.
In the late 1970's and early 1980's a number of private keepers remarked to this author on the "fact" that the north Queensland Tropidechis are somewhat different to those from southern Queensland and New South Wales, but no one actually identified or quantified these differences.
In the intervening period from then until the time of publishing this paper (in 2002), this author has inspected a sizeable number of live Tropidechis specimens as well as the limited samples available at the Queensland Museum, Australian Museum and the National Museum of Victoria. The alleged differences were real and able to be quantified and some of these are used to define the new North Queensland species as described in this paper.
MATERIALS AND METHODS
In 1983, this author inspected a number of live specimens of Tropidechis from the general area of Cairns in North Queensland. This was followed up by the inspection of a large number of live specimens from around Brisbane, Queensland in early 1987.
In 2001, this author made a cursory inspection of specimens held at the Queensland Museum but took no written notes. This was followed up with more detailed inspections at the National Museum of Victoria and finally the Australian Museum in Sydney.
While there was a general shortage of specimens from the North Queensland area as compared to the southern populations, enough live and dead specimens were eventually inspected to confirm the diagnosis of the North Queensland population as being specifically distinct.
Specimens were generally observed (both live and dead) and a number of key measurements were taken of body scales in terms of numbers and size and shape, from which general differences were able to be ascertained.
GENUS TROPIDECHIS GUNTHER 1863
A dangerously venomous genus of snakes (Gow 1983, Trinca, Craydon, Covacevich and Limpus 1971). The venom is not only strongly neurotoxic, but it also affects the blood and causes severe muscle damage (Gow 1983).
It is generally separated from all other Australian elapids by it's strongly keeled scales along all or most of it's body (Cogger 2000). Unlike Death Adders (Genus Acanthophis) which may sometimes have strongly keeled scales (particularly on the head and forebody) this species does not have a tail that terminates in a well-defined spine.
Attaining an average adult length (total) of between .75 and 1 metre, more than one death has been attributed to Tropidechis, including the case of a 59 year old man dying within 5 minutes after being bitten 3 times on the hand.
The natural history of the species is discussed by Beard (1979).
Male combat has not been recorded in Tropidechis to date. However based on the fact that adults are of similar size (Shine (1991) reported a sample of males being on average a miniscule amount longer than a similar sample of females), the possibility of male combat in Tropidechis should not be discounted.

Notwithstanding the above (and in partial contradiction of it), there does appear to remain sizeable and healthy populations of Tropidechis in north-east and south-east Queensland in the more pristine habitats that are generally avoided by the toads.
Another potential threat to Tropidechis in the wild state has been the global decline in frogs, including that resulting from the Chytrid fungus. This has been identified as the cause of decline of frogs in relevant parts of Queensland and New South Wales and again must impact on populations of Tropidechis.
While it is clear that Tropidechis can and will exploit alternative food sources (including rodents in captivity), it is also obvious that numbers of this species must decline if and when frogs decline.
Notwithstanding these severe impacts on Tropidechis numbers, these snakes seem to be surviving in reasonable numbers in pristine habitats within national parks that have been affected by both Bufo marinus and Chytrid fungus induced declines and even extinction's of local frogs.
However as a safeguard against environmental catastrophe in the wild state, this author suggests that sizeable numbers of both Tropidechis be maintained (in pure-breeding groups) in large self-sustaining captive populations.
This goal is easier said than done, as Tropidechis are not popular with private keepers or fauna parks for several reasons.
The snakes are not terribly large or colourful and therefore not pleasing as exhibits. They are dangerously venomous and often pugnacious and hence not a commonly sought after captive.
Added to this is the reluctance of Queensland and New South Wales wildlife authorities to issue licenses to collect or keep Tropidechis. Thus the desired goal of having large self-sustaining captive populations of Tropidechis may in fact never materialize.
FINAL NOTE
Colour photos of both species of Tropidechis, including the holotype and paratype of Tropidechis sadlieri sp. nov. and comparative head-shots between this species and a number of Tropidechis carinatus can be found on the website http://www.smuggled.com/trosad1.htm and/or links from that site within a week of the publication of the hard-copy of this paper in this journal.
Those sites are:
http://www.smuggled.com/TroCar4.htm
for the (Southern) Rough-scaled Snake Photos.
And:
http://www.smuggled.com/TroSad4.htm
for the Northern Rough-scaled Snake Photos.
These photos readily show the differences in head scalation between the two species of Tropidechis as outlined in this paper.
TROPIDECHIS MATERIAL EXAMINED FOR WHICH SCALE AND OTHER DATA WAS RECORDED
(Captive specimens not listed)
National Museum of Victoria:
D4815 large adult; D4804 adult; D8578 Lowood, Q, adult; D8634 North Coast, NSW, adult; D8916 adult; D12318 large adult; D15318 Upper Allyn Mill, NSW, adult female; D15322 Upper Allyn Mill, NSW, Juvenile; D15323 Upper Allyn Mill, NSW, Juvenile; D15328 Brisbane, Q, Small adult Male; D51872 Coffs Harbour, NSW, adult.
Australian Museum (Sydney):
R14691 Clarence River, NSW, adult male; R15213 Cairns, Q. head and neck only from smallish adult; R15326 NSW North Coast, adult male; R16125 Ben Lomond, NSW, adult female; R17031 near Innisfail, Q.
ACKNOWLEDGEMENTS
The people who have assisted this author over the years have been too numerous to name here. However included among this group (with specific relevance to Tropidechis) include Queensland-based private keepers Mike Cermac and Neil Charles who allowed this author unfettered access to live specimens.
As always the relevant museum curators also allowed this author similar access to snakes in their custody, the relevant curators being Patrick Couper and Jeanette Covacevich at the Queensland Museum, Diane Bray at the National Museum of Victoria, and Ross Sadlier and Allen Greer at the Australian Museum in New South Wales.
REFERENCES
Barnett, B. F. 1981. 'Observations on fish-feeding in reptiles', Herpetofauna 13(1):11-13.
Beard, D. J. 1979. 'Rough-scaled snake, Tropidechis carinatus', Herpetofauna 10(26-28).
Cogger, H. G. 2000. Reptiles and Amphibians of Australia (sixth edition), Reed/New Holland Publishers, Sydney, Australia. 808 pp.
Cogger, H. G., Cameron, E. E. and Cogger, H. M. 1983. Zoological Catalogue of Australia (1) Amphibia and Reptilia, Australian Government Publishing Service, Canberra, ACT, Australia. 319 pp.
Fitzgerald, M. 1989. 'Captive reproduction in the Rough-scaled Snake (Tropidechis carinatus)', Herpetofauna 19(1):29.
Gow, G.F. 1983. Snakes of Australia (revised edition), Angus and Robertson, Sydney. 118 pp and 48 plates.
Gunther, 1863. 'Third account of new species of snakes in the collection of the British Museum', Annals Magazine of Natural History, (3) 12:348-365 [363].
Hoser, R.T. 1987, 'Bufo marinus menace', Wildlife Australia, 24 (1), p. 33.
Hoser, R. T. 1989. Australian Reptiles and Frogs, Pierson and Co., Sydney, NSW, Australia. 238 pp.
Ingram, G. J. and Raven, R. J. 1991. An atlas of Queensland’s Frogs, Reptiles, Birds and Mammals, Queensland Museum, Brisbane, Queensland, Australia:391 pp.
Krefft, G. 1863. 'Description of a new species of Hoplocephalus with keeled scales', Proceedings of the Zoological Society of London: 86[86].
Morrison, J., 1987. Experimental studies of mammalian envenomation. Laboratory and clinical investigation of envenomation by the Australian Rough-scaled Snake (Tropidechis carinatus), certain other Elapidae, and the Australian Paralysis Tick (Ixodes holocyclus). Ph.D. Thesis, University of Queensland.
Reilly, V. M. 1963. 'The Rough Scaled Snake (Tropidechis carinatus)', North Queensland Naturalist 31(133):4.
Shine, R. (1991), Australian Snakes - A Natural History, Reed Books, Sydney, NSW, Australia. 223 pp.
Shine, R. and N. Charles. 1982. 'Ecology of the Australian elapid snake Tropidechis carinatus', Journal of Herpetology 16:383-387.
Trinca, J. C., Craydon, J.J., Covacevich, J. and Limpus, C. 1971. 'The rough-scaled snake (Tropidechis carinatus) a dangerously venomous Australian Snake', Medical Journal of Australia:801-809.
Wilson, S. K. and Knowles, D. G. 1988. Australia's Reptiles: A Photographic Reference to the Terrestrial Reptiles of Australia. Collins Publishers, Sydney, NSW, Australia. 447 pp. 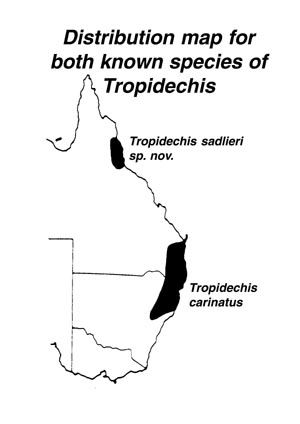 To download the original of this paper exactly as it appeared in the printed journal Crocodilian - click below on the icon to get the 1.5 mb pdf (Adobe Acrobat) file (it will take up to fifteen minutes to download). 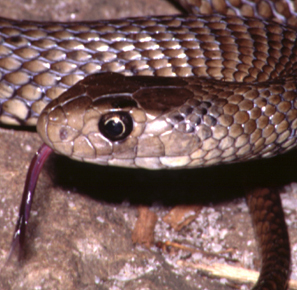