Of the many thousands of snakes kept around the world, few are kept for reasonable periods (years), and even fewer have accurate records kept on them. Calculation of sloughing frequency is near impossible in wild snakes, excluding relatively young Crotalus species which leave an extra rattle after each shedding. Hence observations of sloughing frequency must be based on captive snakes. To the author's knowledge, no sloughing data on Australian snakes has yet been published. The data presented here is based on records of snakes held by the author over the last few years. Sloughing data on non-Australian snakes has been published by many authors on various snakes (though mainly North American varieties). Some records can be obtained from Ahl (1930), Carr (1926), Klauber (1956), Leigh (1928) and Stabler (1930b). 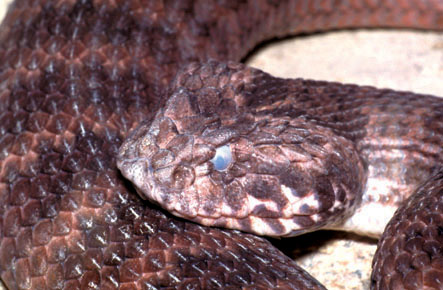 The data for these cases is summarised in Tables 1 and 2. All snakes were housed indoors at the above address, and unless otherwise stated were subjected to similar temperatures to those occurring in the Sydney area, although with lesser diurnal extremes. For most snake's cages, the average mid-summer temperature was 23(C and the average mid-winter temperature was 13(C, when no artificial heating was employed. Artificial heating was employed for all snakes at some time (mainly during summer for most snakes) by means of underground heating cables and or heating globes. Excluding AAA-1 (Snakes are referred to by their file number), APY-1, MS-5 and MS-7, I conclude that the snake's temperatures and metabolic rates were in rough parity with their counterparts in the wild. AAA-1 had an accelerated metabolic rate (above normal temperature), whilst APY-1, MS-5 and MS-7 had slightly decelerated metabolic rates. Four snakes were permanently "heated" by means of underground cable at an average temperature in excess of 30(C. These snakes were LP-1, LP-2, LP-4, and AAA-1. Excluding MS-1, MS-4, and AAA-1, the information contained in tables 1 and 2 is based on mature snakes. The snakes have in general been in perfect health. Four Liasis childreni in Table 1 which were stolen on 8.5.81 and recovered on 31.7.81 were mite infested and in shocking health when returned, but shedding frequencies are not thought to have been significantly affected. Most snakes except the four permanently cable-heated snakes did not feed over the colder mid-year months (roughly a six-month period). During this "rest" period, shedding frequency also decreased. No attempt was made to divide the summary of shedding data between active and non-active times of year. Statistical analysis of the presented data was deemed not useful (is not done here).

Below: A 60 cm female Death Adder of one year of age inside a larger sized cage sloughing. These snakes normally shed their skins in one piece, or occasionally two or three. Shedding problems in these snakes are rare. Failure to slough properly is therefore a cause for alarm. 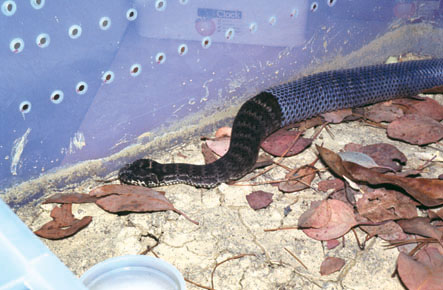 See Tables 1 and 2 for a summary of shedding data of 31 snakes. The shortest periods between sheddings were 15 days for a Death Adder (Acanthophis antarcticus) and 26 days for a Scrub Python (Liasis amethistina). The Death Adder had been treated for mite infestation. Three other similarly affected Death Adders did not have their shedding schedules altered. AAA-1 once had a 16-day interval between sheddings; her growth rate was rapid at that stage. Six to nine months was the longest interval between sloughs, occurring in both Pythons and Death Adders, although intervals between sloughing over a year in length are in the literature. To the best of my knowledge, 15 days is the shortest interval recorded between sloughs in any snake although I believe shorter intervals may be possible in exceptional circumstances. (Claims of shorter intervals on a regular basis are certainly untrue).

Young growing snakes tended to have the highest (sustained) shedding frequencies. AAA-1 had the highest shedding frequency and had sustained rapid growth until stolen on 21.10.1979. Ingerssol (1883), Heyrand and Call (1951) and Klauber (1956) found likewise. MS-1 grew from 51.5cm to 160cm in a 43-month period, shedding his skin 15 times, whilst MS-4 grew from 86cm to 114cm in the same period shedding his skin only 10 times. Both snakes were kept in the same cage. Such data points to shedding frequency being directly increased by growth. The data also reveals a wide intra-specific variability in growth rates, sizes obtained and sloughing rates.

AAA-1 grew from 14cm to 60cm in 15 months, and sloughed 9 times. Such a growth rate in the wild occurs over 24, not 14 months (Shine 1980). Therefore it would probably be safe to assume that young Death Adders shed four or five times a year for their first two years in the wild state. This sloughing rate decreases progressively until it reaches about 2.5 times per year in the fourth or fifth year of life. The sloughing rate then remains stable. (How the above conclusion was drawn in not outlined here). Doubling of metabolic rate in reptiles in response to temperature increases (sustained) in captivity has been noted by Klauber (1956) and others. In a reptile between 20(C and 30(C, a sustained temperature increase of 5(C could easily lead to a doubling or tripling of metabolic rate, and shedding frequency (Keeton, 1980).

The 3 Liasis perthensis which were permanently heated at above 28(C and up to 45(C originated in North West Australia (which is generally hot), and probably did not have their metabolic rates and shedding frequencies increased relative to the wild state. APY-1 probably had her average metabolic rate on a year-round average reduced slightly in comparison to the wild state, due to the fact that APY-1 had no artificial heating in mid winter (av. temp. of 13(C) and also came from Northern Australia. MS-5 and MS-7 were rarely artificially heated (never in winter), and because they originated in areas with average temperatures some 5(C higher than Sydney, their shedding rates almost certainly decreased relative to the wild state.

The author has noted initially increased shedding rates in "heated" Death Adders after lengthy cooling over winter, at greater frequency than Death Adders "heated" at other times. Such a catch-up effect has been observed in growth rates of reptiles by myself and others, and I see no reason why this effect can't be used to explain the increased sloughing just mentioned.

In many snakes, eye clouding and the resulting shedding occurred in the weeks after heavy feeding. Fraser (1936-7) and Allen and Niel (1950) also concluded that well-fed snakes slough more frequently than poorly fed snakes (all snakes held by the author have accurate feeding records with all food consumed measured in grammes). Carr (1926) gives an example of a U.S. Copperhead (Ancistrodon contortrix) which shed six times in eleven months without feeding, leading Stabler (1939) to conclude that food intake and sloughing frequency are not correlated. Although such a conclusion is somewhat dubious, correlation between feeding and sloughing is minimal in stable, mature, healthy captive snakes (which are never very thin or starving). In these snakes skin renewal probably goes on at a fairly constant rate at given temperatures. My data supports this.

Loewen (1947) provides an example of a Massasauga (Sistrurus catenatus) which had its shedding frequency increase with age. Such probably occurred as a result of some feature of captivity and would not represent a general rule. LA-1 and the Morelia pythons were housed in excessively humid cages, perhaps influencing their shedding frequencies. Shea (1980) provides evidence that humidity and free water may accelerate shedding rates in Tiliqua rugosa (a skink). Such may also occur in snakes.

Stabler's (1939) conclusion that varying species of snake on average have roughly similar shedding frequencies (within a factor of ten) is supported by this data.

Groups of snakes sloughing in approximate synchronization probably occurs virtually at random except in very young snakes in the few months after birth (young snakes shed shortly after birth).

Shedding data for snakes of each sex are not analysed in detail separately here, and comparisons between the sexes in the literature are rare. Fitch (1949) concluded from his studies of Crotalus viridis oreganue in the wild that fully adult males shed 1.5 times per year while fully adult females averaged 1.1 times per year. Further investigation here is necessary. it may not be mere coincidence that the female Death Adders had the two shortest intervals between sloughing and higher average shedding frequencies. Also, excluding AAA-1, the female Death Adders were on a year-round average kept at a lower temperature than the males. The python data is insufficient to really show any trends for either sex.

Shedding frequencies have been guessed at by various authors at once a year down to Davenport's (1943) once every 20 days. Once every three to six months is probably the average for most species of snake, whilst 20 days and 365.25 days are probably extremes.

This shedding data and that previously published point to the fact that average shedding frequencies differ from species to species even if closely related. Therefore such data is not easily transposed between species.

Obvious factors which influence shedding frequencies include temperature, humidity and nutrition. The effects of the latter two are hardest to judge. To date no experiments relating to shedding frequencies have been done on groups of snakes of the same kind which are fed different types of food. Treatment of snakes with hormones to increase or decrease shedding rates has not been attempted.

Each snake mentioned in Tables 1 and 2 (as well as other snakes), have individual files with all important data as well as "group files". Further information will be supplied on request if available.

IMPORTANT NOTE:- THE TABLES BELOW DID NOT CONVERT WELL USING THE OCR PROCESS AND MAY PRESENT SOME DIFFICULTIES IN DECIPHERING.

Table 1. Shedding and other data on pythons held by the Author.
(See "Notes relating to tables 1 and 2.").

Species Place of origin File no

The two sets of figures below match up with those two sets above to form a single table.

Table 2. Shedding and other data on Death Adders held by theAuthor.
(See "Notes relating to tables 1 and 2".)

Notes relating to tables 1 and 2.

**These snakes were among the fourteen stolen on 8/5/81. The snakes stolen on this date included seven Acanthophis pyrrhus along with their data files. On 31/7/81 the four Liasis childreni marked in table 1 as stolen were recovered.

*Snakes are permanently heated by underground heating cables, usually in excess of 30(C.

Raymond Hoser has been an active herpetologist for about 30 years and published over 100 papers in journals worldwide. He has written nine books including the definitive works "Australian Reptiles and Frogs", "Endangered Animals of Australia" and the controversial best seller "Smuggled - The Underground Trade in Australia's Wildlife". Click on the text below for details about his latest book that is of major interest to herpetologists everywhere.

Click here for details about a new book that all herpetologists should get hold of ASAP.

Papers about reptiles and frogs - list of papers that can be downloaded via the internet.

Australian Reptiles and Frogs - The Definitive book on the subject.

Non-urgent email inquiries via
the Snakebusters bookings page at:
http://www.snakebusters.com.au/sbsboo1.htm