This is a text only (no italics) version.

In 1985 Laurie Smith published a paper reclassifying what was formerly known as the Children's python. This snake group, Bothrochilus childreni, (for the purposes of this paper synonymous with Liasis), was formerly regarded as a single species. Smith assigned museum held specimens into three distinct species. These are;

1) B. childreni of tropical northern Australia.

2) B. maculosus essentially of coastal Queensland and nearby areas.

3) B. stimsoni of most other parts of Australia including arid areas.

The most accurate distribution information for the three species is provided by Smith (1985). Further information on all three 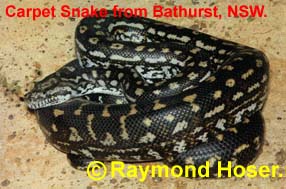 species, including biological details and multiple photos in colour, are provided in my book "Australian Reptiles and Frogs" on pages 126 - 130. (Hoser 1989).

Smith (1985) had trouble in assigning some Queensland specimens to a given species. These specimens tended to come from areas where the ranges of the three forms tended to intersect. Such difficulty in assigning specimens from those areas could indicate hybridisation of those 'species' in the wild to form intergrades. I have certainly seen wild snakes from Queensland and northern inland New South Wales intermediate in characteristics to the so-called B. maculosus and B. stimsoni.

Interestingly however, B. childreni and B. stimsoni populations in the Northern Territory and western Australia appear to be distinct and almost certainly don't hybridise. Distinct B. stimsoni were caught within a few kms. of B.childreni on the southern perimeter of the Kimberleys, Western Australia, by myself and Charles Acheson on a field trip in 1983.

It appears that the only major 'weak link' in Smith's reclassification of the Children's python group may be in parts of Queensland, mainly in the area west of the Great Divide, but not in arid zones, and In some inland parts of north-west New South Wales.

Captive breeding of all 3 'species' of 'Children's pythons' seems to be relatively easy, and is definitely commonplace. Brian Barnett of Ardeer, Victoria, has been breeding 'Children's pythons' of all three forms/species for many years. Many captive specimens seen by myself appear to be intermediate between at least two of the three 'species'. Ascertaining which snakes constitute legitimate hybrids and which are just aberrantly patterned or scaled individuals is a near impossible task unless the parentage of the snakes is known.

Kortlang (1989) documented a case of hybridisation between an adult male B. childreni and female B. stimsoni, which produced fertile eggs on two occasions, resulting in a number of hybrid offspring. The offspring were of intermediate characteristics in relation to the parents. I have been able to examine both adults and young in this case and I am satisfied as to the authenticity of the breeding.

Barnett, who at the time of writing bred more 'Children's pythons' than anyone else In Australia, seemed to think that hybridisation of the 3 'species' had occurred, but was unable to cite specific cases with absolute certainty. He did however state that the parentage of some of his snakes (in terms of which of the 3 'species' were involved), was somewhat dubious.

By my own estimation, Barnett had produced offspring from in excess of 100 clutches of 'Children's python' eggs in the last decade alone, (without mentioning his other snake breeding activities). Readers of this journal may be interested to know that in the 1990 - 91 breeding season, Barnett successfully incubated and hatched nearly 30 clutches of eggs, besides other clutches of newly laid eggs given to him by others, which were in the main produced by various species of Australian pythons.

Simon Kortlang, another of Victoria's major reptile breeders, has successfully hybridised B. maculosus and B. stimsoni, again the offspring displaying characteristics intermediate to the parents. Kortlang also successfully crossed a Brisbane area Queensland Carpet snake, Morelia spilota macropsila, with a New South Wales (Central Coast) Diamond snake, Morelia splilota spilota, with the offspring themselves now sexually mature. Peter Harlow, a snake keeper from Narremburn, Sydney, did likewise in the early 1970's. The colouration of these snakes (in both cases) as opposed to that of naturally occurring intergrades from the Barrington Tops/Port Macquarie and nearby areas of northern New South Wales, are substantially bolder in terms of markings present.

Ron Dencio of Canberra crossed a male Diamond snake, M s. spilota, with a female Carpet snake (presumably M. s. macropsila) in the 1987 - 88 season. The details of that breeding, including a photo of the hatchlings, were detailed (Dencio, 1989).

Kortlang's adult or near adult hybrid pythons mentioned above, were photographed by myself in January 1991. A typically coloured intergrade, M. s. spilota x M.s. macropsila, from Barrington Tops, is pictured on page 137 of my book (Hoser, 1989).

Hybridisation amongst species and subspecies of pythons resulting in hybrids/intergrades have been documented by a number of other authors including the following;

B. maculosus x B. stimsoni - This paper (breeding by Kortlang).

Hoser, R.T. (1988b). 'Some further comments in relation to Australian pythons - (Boidae) and their classification'. Herptile 13 (1) pp 13-18. Journal of the International Herpetological Society.

Non-urgent email inquiries via the Snakebusters bookings page at:
http://www.snakebusters.com.au/sbsboo1.htm

Snakebusters are rated the best reptile shows in Australia, for: