A NEW CASE OF HYBRIDISATION IN MORELIA PYTHONS.

Most herpetologists are familiar with the Carpet Pythons (Genus Morelia).
In recent years these snakes have been kept in ever greater numbers in captivity, (Hoser, 1989, 1993, 1996, 1999).
Although illegal in some states, hybridisation of different races or species has occurred.
The purpose of this short (abridged) paper is to give an account of a previously unrecorded hybridisation case between two Morelia pythons here in Australia. This paper follows the taxonomic arrangement for Australasian Pythons as designated by Hoser (2000).
For other arrangements and citations, please refer to Hoser (2000).
It is expected that there will be some herpetologists who will refuse to adopt the Hoser (2000) classification in the short term and/or try to improperly stop it's widespread adoption, particularly among a vocal group with an axe to grind against this author resulting from his naming of some of these people in the Smuggled books (Hoser 1993, 1996).
However it appears inevitable that the names as used in Hoser (2000) will become generally used within two decades and that is why it is the classification system adopted here in this paper.
This paper does not discuss the relative merits of hybridisation (for or against) at great length.

There has been a substantial amount of literature detailing breeding activity in both wild and captive Australasian pythons at both the species and subspecies level. Refer to Hoser (2000) and sources cited within for further sources.
It also is presumed that all Morelia species (as classified by Hoser (2000) and others) will hybridise in captivity, (refer to Hoser 1999 and to a lesser extent, this paper).
Furthermore it is known that the following hybridisations in captivity involving Morelia have been done.
Morelia cheynei X Katrinus fuscus fuscus
Morelia cheynei X Austroliasis amethistina
Chondropython viridis X Morelia sp. (carpet snake)
Python regius X Python curtus
The first two cases are detailed in Hoser (1989).
This author knows nothing of the latter cases other than photos on an internet website called "marvelous mutants" operated by Wulf Schleip in Germany.
Hybridisation is shunned by purists as a waste of time because the off-spring cannot be used as stock to release back into the wild. Or at least they shouldn’t be.
However commercial and other concerns make many keepers hybridise their snakes when they can.
As already mentioned, the merits of either argument are beyond the scope of this paper.

HYBRIDISATION – A NEW CASE FROM AUSTRALIA

In late 2000, the author became aware of another captive hybridisation of Morelia pythons from Australia.
This one involved a keeper in the State of South Australia whose name has been suppressed for the purposes of this paper. Hybridisation of species in captivity is illegal in South Australia.
The breeding involved a male Murray/Darling Carpet Python (Morelia metcalfei) from Morgan, South Australia, Lat: 34°02’S Long: 139°40’E and a female Bredl’s Python (Morelia bredli) from Alice Springs, Northern Territory, Lat: 23°42’S Long: 133°52’E.
22 eggs were laid and eighteen eggs hatched on 16 January 1997.
The 18 hatchlings were distributed to various keepers and the majority of the young grew to maturity.
The snakes appear to be docile and intermediate in characteristics between the parents.
The snakes are most like the Murray/Darling Carpet Snake (Morelia metcalfei) dorsally, but ventrally are most like the M. bredli.
Because of the illegality of the breeding (contrary to state wildlife laws) further details cannot be provided here.
However a photo of one of the hybrid offspring, as an adult snake measuring about 2 metres in total length taken in November 2000 is provided with this paper.

Various assistance’s, mainly in the form of providing literature or providing of study specimens in their care was provided by numerous people, including those listed at the end of Hoser (2000).

has been a herpetologist for over 30 years. He’s published over 100 papers and nine books. His principal interest is elapid snakes of the genus Acanthophis. 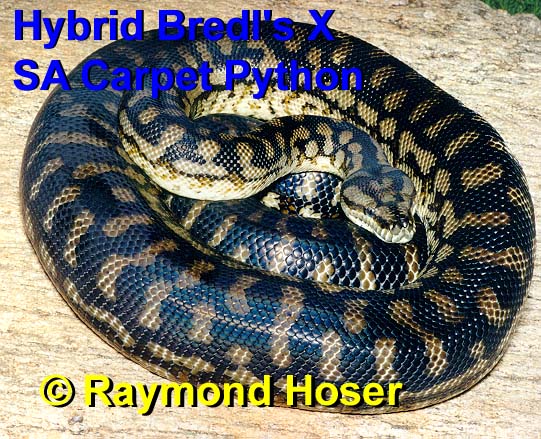 Over 150 further Papers on Australian Reptiles and Frogs.