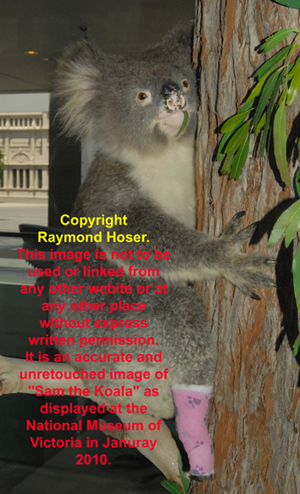 Sam the scam, Sam the koala is an impostor!

Sam the scam: Sam the Koala is an impostor!

On 12 February a paper was published that for the first time revealed that the stuffed “Sam the Koala” sitting in the National Museum of Victoria is an impostor or fake.

Yes, the original water-drinking Koala is a different animal!

That was a male Koala, later renamed “Bob”, who had been captive as far back as 2006!

The paper by zoologist and author Raymond Hoser, went further and showed that the original video shot showing a water-drinking Koala at Mirboo North in February 2009 was effectively a bootleg, a “set-up” and not a random encounter as alleged until now.

The paper published in Australasian Journal of Herpetology (Issue 8 pp.1-64), went further and detailed the fairly simple (and easily copied) forensics behind exposing one of the most successful frauds in recent Australian history, including various other activities all successfully designed to raise large amounts of money, running to the many hundreds of thousands of dollars.

As it happens, most of the money raised went to worthwhile causes and a logical question to be asked is why the author Raymond Hoser chose to expose the fraud at this late stage.

In response he said:

“Most of the money likely to be raised by “Sam the Koala” has already been raised, so I don’t think I’m upsetting too many people.  More importantly, the public interest is best served by telling the truth and so it is better that it come out sooner rather than later …the fraud and the story is just too big to hide”.

As to how many people were knowingly involved in the fraud, the exact detail remains unknown, although claims by some involved suggest that many well-known people were included.  Significantly, the main man involved in the fraud, CFA fireman David Tree has admitted to his part in the caper and since justified it along the lines that it diverted people’s attention away from the destruction of the black Saturday fires.

and following the links.

On 7 February 2008, a series of Victorian bushfires killed 173 people and caused massive property losses and death of wildlife.  On 10 February a supposedly original video emerged on the internet site “Youtube” that depicted CFA Fireman David Tree feeding an allegedly injured koala a bottle of water.  At the same time (as in the next day), newspapers worldwide, promoted the video and four associated still camera photos taken at the same time, with the Koala gaining “celebrity status” and being named “Sam the Koala”.  The official (Government) version of the story as dutifully reported in the mainstream media (including the Age and Herald-Sun), from then until present stated that the same Koala was cared for by a Mrs Colleen Wood until it’s death on 6 August 2009 and then lodged with the National Museum of Victoria, whereupon the same stuffed animal remains as of February 2010.

In summary the video depicted was carefully planned and executed and not an unexpected and random act of kindness caught on film as alleged by Tree and agents. It was in fact a bootleg of at least two similar acts both predating the making of this video and known to all or most people most actively promoting “Sam the Koala”.  The depicted Koala had been “planted” for the express purpose of making the pre-planned video and associated photos and was Mr Tree’s second attempt at making a famous “bear” named “Sam”.  The origin of the idea goes back at least as far as 2003 and probably further. The stuffed Koala at the Museum, now identified as “Sam the Koala”, is female and is not the same koala depicted in the original video and photos. It is therefore an impostor or a fraud.

The originally depicted Koala is a male, identified by the relevant parties shortly thereafter as “Bob the Koala”, allegedly captured in Boolarra two days before the (now female) “Sam”.

For the first time ever it can reported that the same “Bob” was in fact a long term captive, having been held by Wood at least as far back as April 2006.

A secondary “swap” was the attribution of the relevant still images. In the first instance and for some months thereafter, photos were consistently credited to “Russell Vickery” of the Herald-Sun.  However post-dating a report in the Herald-Sun on 12 August 2009, relating to a (then) proposed “Sam the Koala” trademark opposition by the Victorian government through the Department of Sustainability and Environment (DSE), the media and other sources commenced crediting the photos to DSE employee Mark Pardew, including “rebranding” this information on the web on earlier news clips without noting this editing.  The photos credited are the same four identical images raising further questions as to reasons for the “swap”.

Besides the fraudulent and deliberate swapping of Koalas identified as “Sam” shortly after the making of the February video, an act that evidently is known to many involved with “Sam the Koala” since February 2009, a large number of illegal and dishonest activities have also been uncovered.  The common thread and motivation has been to scam enormous amounts of money in the form of cash donations from well-meaning members of the public or to divert attention from culpable acts and negligence that led to the massive destruction of life and property on 7 February 2009.  Because the fraud has remained undetected to the public at large (or at least undisclosed) and there has been a transfer of hundreds of thousands of dollars to participants and entities they control, the “Sam the Koala” campaign has apparently been highly successful.

Limited numbers of printed hard copies (at cost) are available at: